This was my first 35mm film camera, which right now is collecting dust in the basement. Haven’t touched this camera since I bought my first digital camera. But it was a great camera. I had three lenses, a 50mm f1.2, a 28mm and a zoom lens.

This was my first digital camera. It had a resolution of 640×480 pixels (ugh!), which should translate into about 0.3Mpixel. Today, the pictures look horrible. It used a floppy to store the images, and could actually fit 20 pictures on a floppy. And with a 10x optical zoom, this was not really a bad camera for it’s time.

In lack of any useful software for copying the images into the hard disk, this is when I started writing my DIA application for copying and renaming the pictures, into the only format which made sense (to me at least); giving each image a file name consisting of the date and time the image was taken. I still use the same naming scheme when I now import into Adobe Lightroom directly.

The Sony Mavica was very faithful, and never failed on me. I started buying Sony TV and stereo as well, and my next camera was Sony Cybershot F505V, a 3Mpixel camera, which used the Sony Memory Stick. The really great feature with this camera, is the possibility to tilt the camera house from the lense, making it really simple to take ground-shots or over-head shots. Also with 3Mpixel, the image quiality was really improved from the Mavica. 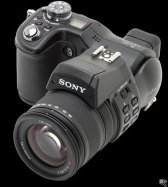 The Sony Cybershot F828 increased to 8Mpixel, and accepting both Sony Memory Stick and Compact flash. Like the F505V, this can also tilt the house, and has a 28-200mm F2.0-2.8 lens, as well as a four color CCD.

In 2008, I took the step into the digital SLR world with the Sony Alpha 350. This has live-view, and a tiltable screen, which is useful for the ground and over-head shots. I have an external flash HVL-F56 flash, and 4 lenses, 28-70mm zoom, 55-200mm zoom, 11-18mm wide angle and 100mm macro. I also have the vertical grip and the GPS unit, which records the location where the pictures are taken. I later replaced the two kit lenses with a 18-250 lens.

The next camera was a Sony A 99, which has 24mpixel, and is my first full-format camera.

My lens collection is the same, but I’ve added the 2x teleconverter.